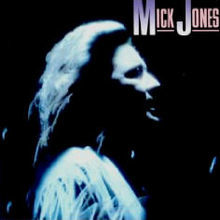 Mick Jones is singer-songwriter Mick Jones's self-titled debut/studio album, released in 1989. Jones is one of the original members of the group Foreigner. The album was Mick Jones' only solo release.

Released on Atlantic Records, this album included Billy Joel and Carly Simon as guest singers. Joel sang with Jones on the song "Just Wanna Hold" and Simon sang with Jones on the songs "That's the Way My Love Is" and "Write Tonight". It is widely believed that the co-composer "M. Phillips" on the track "Just Wanna Hold" is a pseudonym of Mick Jagger.